While Blarney Castle is not the biggest castle in Ireland, nor the oldest — that honor goes to Kilbrittain Castle, about an hour south, dating back to 1035 — it easily ranks as its most popular, with hundreds of thousands of travelers coming from all across the world to stroll the 1,500-acre grounds, explore the 14th-century castle, and, of course, kiss its famous Blarney Stone. According to legend, puckering up to the hulking, rather grimy, extremely old stone imparts the gift of gab, or eloquence. But that's not the only thing interesting about this enchanting site.

The castle came before the word

The word 'Blarney' made its way into the Oxford English Dictionary back in the 1700s. Based on the legend attached to the stone, the editors gave the meaning as: "talk which aims to charm, flatter, or persuade (often considered typical of Irish people)." As in: "It took all my Irish blarney to keep us out of court."

Anyone who watches Game of Thrones understands that life in the 1300s was no picnic — and Blarney Castle was no exception. A "murder room," located just above the castle's main entrance, proved crucial in warding off potential intruders. Anytime an unwanted visitor showed up, a sentry would drop rocks, hot oil, or whatever weapons they could get their hands on, through a square hole in the floor.

Scientists only just figured out where the stone came from

For years, rumors swirled around the stone's origins. Did it come from the same rock as Stonehenge? Was it related to the Stone of Scone, the coronation stone used by early Scottish and English kings? In 2014, geologists confirmed that the stone was sourced from 330 million-year-old limestone and that it couldn't have come from England — molecular samples proved the rock was actually native to southern Ireland.

Cormac McCarthy was the first person to kiss the stone

No, not the famous author. In 1314, the stone was gifted to the castle's then-owner, King Cormac McCarthy, as a thank you from King Robert the Bruce of Scotland for providing the military help that led to winning the Battle of Bannockburn. According to legend, a witch who lived in the nearby Druid rock garden told the king that the stone would bestow special gifts of eloquence upon anyone who kissed it, so he did. And the tradition has continued ever since.

According to historians, the Blarney Stone didn't get its mojo from a witch at all, but from Queen Elizabeth I. As the story goes, the English queen was eager to capture Blarney Castle for herself, but every time her troops showed up to storm the ramparts, smooth-talking Dermot McCarthy, a descendant of Cormac, managed to talk them out of it. After multiple failed attempts, Elizabeth I dismissed the fiasco as 'blarney,' and the name stuck.

Kissing the stone isn’t as easy as it sounds

Rather inconveniently, the Blarney Stone was built into the east wall of the battlement 85 feet off the ground — to reach it, you'll have to climb 128 narrow stone steps. Once you've gotten to the top (and you've waited your turn), steady yourself for one of the most awkward smooches of your life: laying down on your back, a docent will assist as you grip a set of iron bars, tilt your head backward, and deliver an upside-down kiss. It's the only way.

There’s more to see beyond the castle

What Irish estate would be complete without beautiful gardens? From arboretums with rare trees to mystical Druid rock formations with names like the Witch's Kitchen and the Wishing Steps, the gardens of Blarney Castle spin a tale as unique as the stone itself. Stop by the Bog Garden, where a trio of 600-year-old Yew trees sits alongside a gently trickling waterfall. Or, in early spring, be lulled by the sound of rustling leaves along the estate's twin lime tree avenues.

Visitors would do well to heed a sign posted at the entrance to the Poison Garden, which warns: "Do not touch, smell, or eat any plant!" Opened in 2010, this highly researched collection of over 70 flora contains such toxic shrubs as Henbane, Hemlock, Wormwood, and, unexpectedly, Cannabis. Though the enclosure — which keeps its deadliest specimens locked in black iron cages — occupies just a tiny fraction of the wider grounds, it's easily the site's most popular attraction. 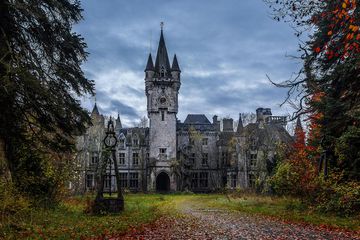