The answer may surprise you.

If you think the biggest mountain in the world is pretty obvious (a little hill known as Mount Everest), you may be surprised to learn the subject is a point of disagreement. As many as three mountains could take the title, and which actually holds the record depends on the point of reference. Whether you measure from the base of a mountain to its summit, a mountain's distance from the center of the Earth, or its elevation above sea level can be the difference between Everest being the tallest or just one of the tallest mountains in the world.

Mount Everest, in Nepal, is perhaps the most well-known contender. It's the tallest mountain from sea level to peak. The storied mountain officially stands 29,029 feet tall and indisputably reaches the highest altitude.

Here's where things get complicated. Mauna Kea, a dormant volcano on Hawaii's Big Island, extends deep beneath the Pacific Ocean. Measuring from its base to its peak, Mauna Kea reaches a staggering 33,500 feet. Although you can only achieve an elevation of 13,796 feet above sea level by driving or hiking, this Hawaiian giant is nearly a mile taller than Everest if you were to measure it whole.

It gets even more confusing when factoring in Chimborazo, in Ecuador. Chimborazo's summit is at 20,564 feet, which is clearly shorter than Mount Everest. Earth isn't a perfect sphere, however, and because Chimborazo is so close to the equator, this mountain rises from nearly the widest stretch of our planet. Technically speaking, Chimborazo is the highest mountain above the center of the Earth — no less than 1.2 miles farther away from Earth's core than Everest.

So which is really the biggest mountain in the world? It turns out that, like everything else, it all hinges on perspective. And if you want to conquer the world's highest, tallest, all-around biggest mountain, you may want to summit all three. Just to be sure. 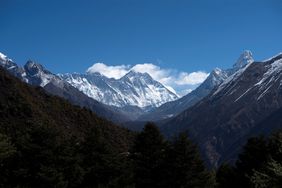 Mt. Everest Finally Has an Official Height After Years-long Dispute Between China and Nepal