Located along the California Pacific coast midway between San Francisco and Los Angeles, the ornate Hearst Castle will reopen to the public on May 11.

The 127-acre estate of media magnate William Randolph Hearst was originally designed by architect Julia Morgan over 100 years ago and has been shut down since March 2020 as a response to the COVID-19 outbreak. The attraction then remained closed after a storm caused damage to its access road in January of 2021.

"Hearst Castle is a state treasure and we are thrilled to reopen this wonder to the public to enjoy in a safe and responsible manner," California State Parks Director Armando Quintero said in a statement.

The stunning location atop La Cuesta Encantada (The Enchanted Hill) in San Luis Obispo County's San Simeon sets a fairytale-like backdrop for the estate, but also requires access via a steep and winding road that ascends 1,650 feet across five miles. "The road navigates rocky outcroppings and steep canyons by splitting into separate, narrower, one-directional sections for uphill and downhill traffic," California State Parks described in a release.

The 2021 storm brought 20 inches of rain to the area and exposed the failure of the drainage system that included 27 outdated clay-pipe culverts from the 1920s along an upper 2.25-mile section of Hearst Castle Road. Since its original construction, the delicate culverts and drains had to be cleaned every winter, and issues with both draining and washouts started in the 1940s.

Pre-pandemic, about 850,000 visitors a year and nearly 22,000 bus trips were made along the road—as frequently as every 10 minutes during peak periods, putting pressure on the old system. The $13.7 million upgrade project was focused on visitor safety for years to come, with a stronger roadway, enforced retaining walls, and a new drainage system that can withstand major storms.

"We are confident that these once-in-a-lifetime repairs and improvements to the road facility will serve countless generations to come," Quintero added.

As part of the reopening, as well as a belated 100-year anniversary celebration of the landmark's construction, which began in 1919, a new two-hour tour will be offered, honoring Morgan, who was the first certified female architect in the state. The remaining tours will also have a new pricing structure that integrates all fees and saves most visitors about $3 to $6 per ticket. Reservations can be made starting March 31.

With 165 lavish rooms and elaborate gardens, walkways, and terraces on the property, highlights of Hearst Castle include the outdoor 345,000-gallon Neptune Pool, indoor mosaic-tiled Roman Pool, and the Grand Assembly Room.

Other related sites in the area along the Highway 1 Discovery Route, which follows California's dramatic Pacific Ocean shoreline, include wild zebras grazing below Hearst Castle and wine tasting at Hearst Ranch Winery. 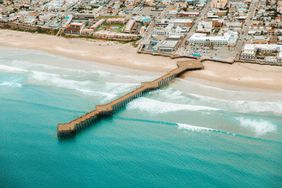