Lake Compounce first opened in Connecticut in October 1846. It has since survived not one, but two global pandemics, as well as two world wars and countless shifts in societal preferences. The park itself was an accident inspired by a failed science experiment that ultimately led to the installation of picnic tables and rowboats - the epitome of high-class entertainment at the time.

This is a place where Frank Sinatra performed before he was famous and travelers came to dance under the stars, basking in the sounds of big band live jazz from the likes of Count Basie. Multicourse dinners used to cost just 50 cents, and a speedboat ride on a hot summer day would set a traveler back 15 cents.

Nowadays, Lake Compounce is home to Connecticut's largest water park, as well as four roller coasters, a Ferris wheel, a century-old hand-carved carousel, and several Instagram-worthy photo spots. A $50 million makeover later, a six-story waterslide towers over the lake where rowboats were long ago replaced by speedboats.

That ride, dubbed the Venus Vortex, is designed to resemble the mouth of a hungry Venus flytrap as three-person rafts navigate its twists and turns. Its completion was delayed until this year because of the pandemic.

The pandemic, however, wasn't Lake Compounce's first challenge. Its own financial struggles pushed it closest to the edge, shortening some seasons to as little as a single weekend aimed at extending its streak of continuous operations.

This summer is poised to be much more lively. Lake Compounce is open from Thursdays through Mondays until Aug. 22, and it's already considering expanding its hours later this summer. Face masks are not required for vaccinated guests, a park spokeswoman told Travel + Leisure. 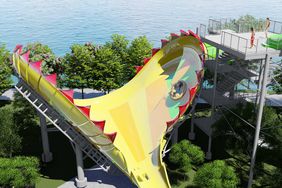