At Arca Tierra, in Xochimilco, old knowledge continues to put down roots.

Boarding a colorful canal boat before dawn is not your typical way to start a Sunday in Mexico City. Yet there I was, watching as the mist dissipated and the surroundings revealed themselves: willows drooping to meet the mirrored water, herons perched on the banks.

The Xochimilco canal system, 15 miles south of downtown, is best known for festive barges crowded with partygoers. But what makes these waterways so unique are actually the chinampas, artificial islands of packed mud where crops are grown; they were built more than a thousand years ago by the Nahua people.

“This is an ecosystem and an archaeological site, as well as a food production site,” says Lucio Usobiaga, executive director of Arca Tierra, an organization working to preserve these at-risk chinampas. Urbanization, among other factors, has led to erosion and an overall decline of this style of farming. “Our main goal is to show how important agriculture is in the hands of communities,” Usobiaga explains.

Arca Tierra provides training, technical assistance, and even seeds to farmers in the area. It sells produce to Mexico City residents and some of the city’s best restaurants, including Rosetta and Pujol. Travelers can visit Arca Tierra’s own chinampa for a farm-sourced meal, as well as events and classes to better understand this fragile ecosystem — and how, if protected, it can thrive.

When the boat finally docked around 7 a.m., I walked through a stand of tall trees into a wild, lush garden. Tin cups of coffee, freshly brewed over an open fire, were passed around to our party of 30 or so. The Arca Tierra team showed us around the farm, which sprouted with lettuces and herbs, before a breakfast of egg gorditas, spinach-and-mushroom tacos on purple-corn tortillas, and platters of a rainbow salad served at long tables under a palapa. The food was honest and unpretentious, and the produce shone.

A version of this story first appeared in the October 2022 issue of Travel + Leisure under the headline "Fertile Ground." 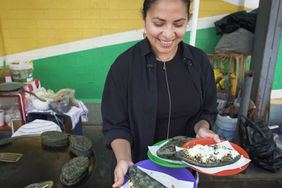 And Just Like That, NYC's 'Sex and the City' Bus Tour Is Back