One of the most incredible natural events on the planet is happening a bit early this year.

The Great Wildebeest Migration, the world’s largest migration of wildlife, is a popular event to witness in Kenya's Maasai Mara. While migration happens year-round, as the Telegraph India reports, it's in July and August that the wild beasts cross the Mara River. This year, they’ve already been spotted in the area.

The Maasai Mara National Reserve, also known as Masai Mara or the Mara, is a 583-square-mile protected area for wildlife. Visitors typically head here to witness the majestic, natural phenomenon of the wildebeest migration on safari between July and October.

More than 2 million animals travel from Serengeti National Park in Tanzania to the Maasai Mara National Reserve, which is why it’s hailed as one of the Seven National Wonders of Africa. According to Africa.com, thousands of zebra, eland and Thompson’s gazelle also make the journey, too. The trek is particularly hard, and more than 250,000 wildebeest to begin the journey do not make it to the end every year, according to LiveScience.

Obviously, they’re not just taking a long walk for the fun of it. The Great Migration is triggered by the dry season, which can run from any time between June and October. That the animals have been spotted early this year in the Mara means the dry season has started. During the dry season, according to Live Science, other bodies of water in the Serengeti dry up, leaving the only other source of water for the animals in the Mara River.

If climate change and human intervention continue to remain unchecked, this could potentially change the migration patterns in the future, according to Africa.com. Not only will animals have to change when they will have to search to more food and water, but they may also have to venture out to new locations as well.

By the end of the summer, usually in September, the rainy season will begin again and the animals will start their journey back to the Serengeti. The best way to see the event is to know the path of the migration and to try to plan when you think the animals will be in the area you’ll be visiting. Of course, when the seasons change early and unexpectedly, that can throw a wrench into your plans.

Luckily, you’ll still likely be able to see the herds in July and possibly August if you plan on going to the Mara this year. There are tons of companies that are able to guide visitors in the area, including Richard Branson’s luxury tented safari camp, Mahali Mzuri, located in Olare Motorogi Conservancy. (In honor of the early migration, Mahali Mzuri is offering a free night on bookings of four nights or more from now through December.)

This awe-inspiring event is truly worthy of your bucket list, so it’s important to plan well, but also be flexible. 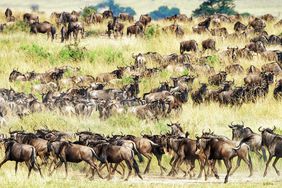 How to See the Great Wildebeest Migration 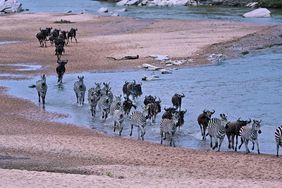 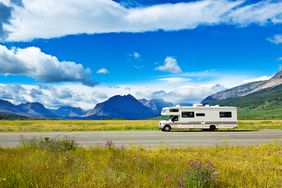 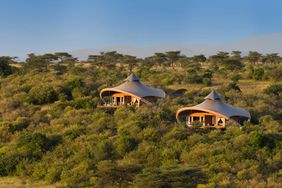 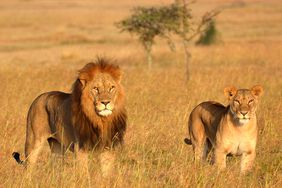