For a magical summer trip, head to the Alleghany National Forest for an annual firefly light show.

Night had fallen on Allegheny National Forest in northwestern Pennsylvania. It was a few days past the summer solstice — that magical June evening when Robin Goodfellow and his troupe of fairies from A Midsummer Night's Dream emerge to frolic in the forest and hoodwink young lovers. But instead of Shakespearean sprites, I'd come in search of the rare Photinus carolinus, a charismatic species of firefly that puts on a spectacular, synchronized light show each year, just as spring slips into summer.

I first observed this glittering mating ritual, in which the males of the species illuminate in unison to attract females, on a 2016 trip to Great Smoky Mountains National Park. It was there, in 1992, that a naturalist named Lynn Frierson Faust helped scientists identify the Western Hemisphere's first synchronous fireflies. A decade later, after a tip-off from some campers, Faust and her Firefly International Research and Education (FIRE) colleagues confirmed the existence of P. carolinus in Allegheny National Forest, citing a particularly robust population near the blink-and-you'll-miss-it village of Kellettville.

The news came as a surprise to Peggy and Ken Butler, whose Kellettville backyard turned out to be a hotbed of firefly activity. "We didn't know that the lightning bugs were anything special," Peggy Butler told me. "But then the FIRE team came and introduced us to the world of synchronous fireflies, and our lives changed."

Peggy recalled that Faust had presented two choices. "Lynn said, 'You can walk away quietly, or embrace these fireflies as something that might be a benefit to your community.'"

The Butlers opted for the latter, forming a nonprofit and, in the summer of 2013, hosting the inaugural Pennsylvania Firefly Festival on their sprawling rural homestead, which they later dubbed Kellettville Firefly Farm. The couple saw the fireflies as a way to promote environmental stewardship and bring tourism to their county, one of the state's poorest.

Faust had also shared a cautionary tale. She had witnessed the influx of "fireflyers" in the Smokies, which led the park to institute a lottery system to manage the crowds. The Butlers were skeptical. "Ken and I said, 'Well, nobody's going to come to Forest County for this,'" Peggy told me. They couldn't have been more wrong.

The early summer sunlight bounced off riffles in the river as we pushed away from shore. In the distance, a lone green heron skimmed the river's surface with an eye toward a morning meal.

Last June, my fascination with the bioluminescent beetles led me to drive from New York to the Pennsylvania Wilds, a 13-county region that includes Allegheny National Forest. The Wilds encompasses what was once one of the country's most heavily exploited natural landscapes. A century and a half ago, barons of industry cut down the forests and mined the earth for oil and coal. Today, lush mountainsides and pristine woodlands tell a story of resurrection.

I stayed at the Lodge at Glendorn (doubles from $530), a luxurious retreat outside the town of Bradford. In 1927, Clayton Glenville Dorn, a petroleum engineer with a passion for fly-fishing, purchased the 1,500-acre property as a family gathering place. Now a Relais & Châteaux resort, it consists of a main lodge and 12 storybook cottages. I fell instantly in love with mine, the whimsical log-and-plank Miller Cabin, which is tucked along the edge of a stream.

I spent the days leading up to the firefly festivities rambling the back roads and byways that wound through the Wilds' westernmost reaches, exploring remote swaths of wilderness that included not only Allegheny National Forest but also six state parks, two National Wild and Scenic Rivers, and more than two dozen state game lands.

One sunny morning I made my way to Warren, a former timber town that turned to oil and manufacturing when the lumber boom fizzled. I had a date to paddle the Allegheny River with Piper VanOrd. A U.S. Navy air traffic controller living in Alaska, VanOrd returned to her Pennsylvania roots in 2006 after a listing in the Warren Times Observer caught her eye — Allegheny Outfitters, a local canoe rental service, was for sale.

Although VanOrd had been looking to shift professional gears when she spotted the ad, something besides real estate fueled the change of venue. "The creation of the PA Wilds played a big role in us moving home," VanOrd said, unloading our kayaks from the trailer. We'd driven to Buckaloons, a riverside recreation area that was once the site of a Seneca Nations village. The early summer sunlight bounced off riffles in the river as we pushed away from shore. In the distance, a lone green heron skimmed the river's surface with an eye toward a morning meal.

"Outdoor recreation wasn't really a thing here back then," she continued, "but knowing that people were starting to look at these forests and rivers and think about protecting and promoting them was huge."

Throughout the past 15 years VanOrd has supported the Wilds' mission as both a small business owner and an environmental advocate. But reentry has had its challenges. "The hardest part about living in rural PA is that people are just terrified of change," VanOrd said as we paddled past Thompson's Island, one of the Allegheny's seven federally protected wilderness islands. "There's a real art to getting people to embrace new ideas. But it's inspiring when you start to make headway. The tiny victories are to be celebrated for sure."

From Warren, I headed south through the heart of the National Forest. Dense woods lined both sides of the twisty, two-lane road while rough and tumble hunting camps and a kitschy, roadside gift shop with a Bigfoot silhouette affixed to the door offered the only hints of human habitation. I found Gateway Lodge (cabins from $169) a 1934 log-cabin landmark run by mother-daughter duo Deb Adams and Jody Fesco, just beyond the forest's southern boundary in Cook Forest State Park. The Lodge has earned regional acclaim for its restaurant, Wildcrafter's Kitchen, where I tucked into savory, Hen-of-the-Wood crepes and wild-boar pierogies made with gluten-free flour from Italy.

Related: Synchronous Fireflies Are Coming Back to This South Carolina National Park — How to See Them

I spent the morning of the festival hiking in the Forest Cathedral, a National Natural Landmark in Cook Forest State Park that contains the largest stand of old-growth white pine and Eastern hemlock in the Northeast. Ironically, these forest giants, some of which stood during William Penn's days, were saved from the axe by the Cook lumber family, early conservationists who deeded 7,200 acres of timberland to the Commonwealth in 1927. I passed a thicket of rhododendron, glossy leaves interspersed with clouds of cotton candy blossoms. Dappled sunlight filtered through the soaring, evergreen canopy and I found myself feeling grateful for the Cook family's foresight — grateful, yet distracted.

Synchronous fireflies rarely fly or flash when temperatures fall below 60 degrees. I'd been stalking the forecast, willing Mother Nature to cooperate. On the morning of the festival, the nighttime low was predicted to be a balmy 68 — ideal conditions for a memorable light show.

Early that evening I followed Route 666 to Peggy and Ken's farmhouse. People milled around the big backyard while local folk musician Matt Miskie sang and played guitar, and science educator Don Salvatore prepared to give a presentation called "The Secret Lives of Fireflies."

The scene couldn't have been more mellow — a far cry, Peggy told me, from previous years. "One time we had almost 1,100 people," she said. "We knew we needed to do something or we were going to endanger the fireflies." Now the festival is limited to 50 participants a night, with an emphasis on education and conservation.

It was after midnight when I left the Butlers' farm. As I drove through the forest's inky darkness, the words to one of Miskie's songs played in my head:

Dance beneath your summer skies.

A version of this story first appeared in the April 2022 issue of Travel + Leisure under the headline The Light in the Forest. 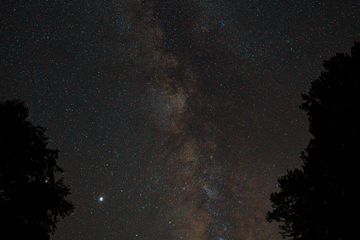 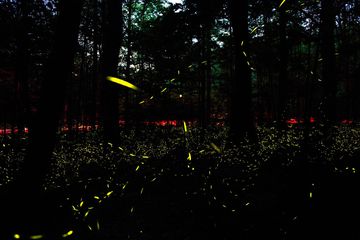