This isn't the first time their antics were documented on social media.

The Shedd Aquarium in Chicago may have reopened to the public, but its resident penguins recently went on a field trip, touring the nearby Field Museum.

The Magellanic penguins, Izzy and Darwin, waddled around the empty museum ahead of its opening on July 17, checking out the dinosaur exhibits and running from SUE, the institution’s famed T-Rex, a 40-foot-long fossil skeleton that is 90 percent complete.

“Birds are modern, avian dinosaurs, and that includes penguins like Izzy and Darwin! They evolved from the theropod dinosaurs like the T. rex,” the Shedd Aquarium wrote in an Instagram post, thanking the Field Museum for “the ultimate 66 million year #tbt.”

SUE, who has her own hilarious Twitter account, said the video of the curious penguins may look “cute, but it was actually a meeting with the new theropod cult I’m starting.”

While there, the penguins posed for a photo — or a selfie — with the large skeleton. And while SUE tweeted she “tried to teach them how to pose,” the blurry photo showed “clearly they didn’t understand.”

This isn’t the first time the Shedd Aquarium penguins and the resident dinosaur have gotten into some antics. First, the aquarium took its rockhopper penguins on a little jaunt around the building, visiting fellow marine animals, while it was closed. Inspired by their adventures, SUE (or a human-sized costume version of her, at least) took the time to check on the shuttered museum and its own penguin exhibit.

If you are looking to visit the Windy City, try a road trip as Chicago (and Route 66) happens to be one of the best road trips in the midwest. 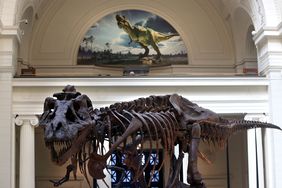 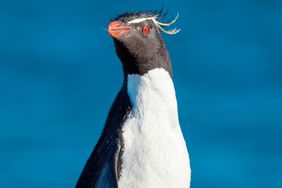 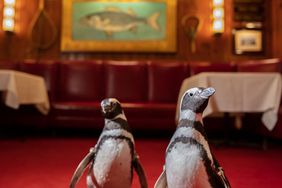