The twin cubs are the second and third pandas to be born in France.

The female twins, named Huanlili and Yuandudu, were born in early August at the Beauval Zoo, or ZooParc de Beauval, in France. Since the cubs were entirely reliant on their mothers during their first few months of life, Huanlili and Yuandudu didn't appear in public until Dec. 11 when they were about four months old.

In their earliest days, pandas aren't exactly the lovable balls of black and white fur that we know them to be. They're born blind, furless, and pink.

For animal lovers, the wait has paid off. In a video released by Beauval Zoo, located just south of Paris, the twins can be seen clumsily exploring the territory they'll call home. There's some slipping and sliding on the smooth floor and at one point, they're even seen trying to climb the rocks with mild success.

The cubs' mother, Huan Huan, and father, Yuan Zi, also call the Beauval Zoo home and are on a 10-year loan from China as a way to highlight the nation's good relationship with France, The Associated Press reported. Huanlili and Yuandudu are France's second and third cubs after Yuan Meng, the first panda ever born in France, came into the world in 2017. 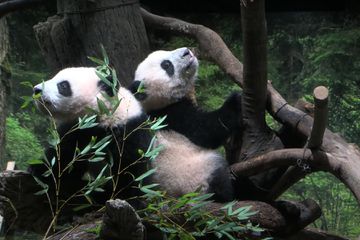 Adorable Twin Panda Cubs Make First Appearance at Tokyo Zoo — With Over 1,000 Visitors to Greet Them 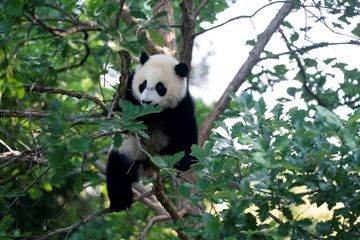