Having a snack on the steps of the Fontana dei Catecumeni will cost you.

An American tourist visiting Rome was fined hundreds of dollars after he was caught eating and drinking while sitting on one of the city’s fountains.

The 55-year-old traveler was handed a €450 ($450.15) fine after he settled on the side of the Fontana dei Catecumeni and started to eat around 1 a.m. on Saturday, CNN reported, citing local police. Officers fined the man in an effort to maintain “decorum” and protect monumental fountains in the city as he "was intent on drinking and eating on part of the fountain."

The fountain, which sits about a 15 minute walk from Rome’s famous Trevi Fountain, is made from travertine and was built around 1588 to 1589, according to the Capitoline Superintendence for Cultural Heritage. The fountain was then restored in 1997.

In addition to protecting “environmental decorum,” the famous city also bans street drinking, organizing pub crawls, and swimming in the city's fountains, CNN reported. In 2019, Rome introduced a hefty fine for anyone caught sitting, eating, or drinking on the city’s Spanish Steps — once a popular and iconic spot to rest.

This isn’t the first time Rome has enforced its rules around famous landmarks: CNN reported a 37-year-old Saudi man was apprehended by border police in May after a Maserati was driven down the Spanish Steps, and two American tourists were fined and even briefly banned after they damaged the steps with electric scooters in June.

Rome is not alone. Several cities in Italy have cracked down on overtourism in recent years, fining visitors who break the rules. Last month, a pair of tourists were fined for riding motorized surfboards down Venice's Grand Canal with the city’s mayor calling them "overbearing imbeciles who make a mockery of the City.”

In 2020, a tourist was also fined $1,200 after trying to steal more than four pounds of sand from the Italian island of Sardinia. And in 2019, The Associated Press reported two German travelers were fined for making coffee on Venice’s 430-year-old Rialto Bridge. 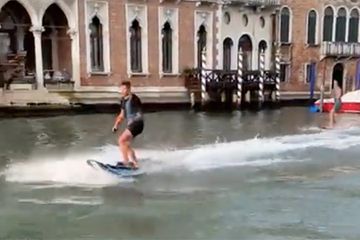 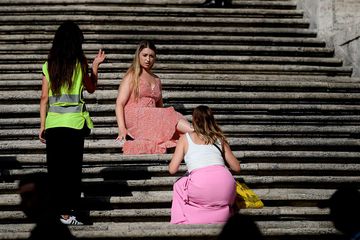 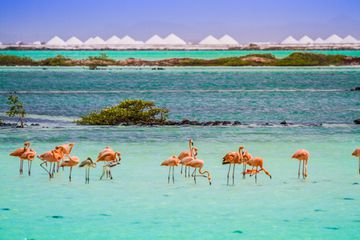 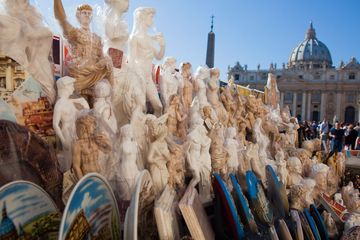