Virgin Atlantic's A330neo will make its debut on the airline's Boston to London route in October 2022; tickets go on sale this month.

In 2019, Virgin Atlantic placed an order for 16 brand-new Airbus A330-900neo aircraft. And while the subsequent two years were a difficult time for travel, the industry is finally rebounding — just in time for the U.K.-based airline to receive the first three aircraft in the order.

The highly efficient A330neo will eventually replace Virgin Atlantic's older A330-900 aircraft, reducing fuel burn and carbon emissions by 11% from the older model — something that aligns closely with Virgin Atlantic's mission to fly "the cleanest, greenest fleet in the sky," according to a press release.

For this aircraft, which has slimmer proportions than other wide-body planes like the Airbus A350, Virgin Atlantic had to design a new business-class product — a collaborative project between the company's in-house design team and London creative agency Factorydesign. They riffed on Virgin Atlantic's existing Upper Class (the airline's term for business-class) suites, which are currently found on its A350 aircraft. But on the A330neo, the 30 Upper Class suites will have fully closing doors instead of partially closing ones, and each of the seats will be forward-facing rather than a mix of backward and forward. And they've been kitted out with the latest tech, including bluetooth connectivity to the in-flight entertainment system and wireless charging ports.

Virgin Atlantic is known for having social spaces onboard each of its aircraft, and that trend will continue with the A330neo. Called the Loft, the space is a small onboard lounge for the exclusive use of Upper Class passengers that has communal seating for up to eight and a self-service refrigerator and freezer with treats like alcoholic beverages and ice cream. It even has wireless charging ports, just like the Upper Class suites.

But the star of the show is an even more premium seat that's making its debut on the A330neo: the Retreat Suites. An upgrade over the traditional Upper Class suite, these suites provide even more space for passengers, with a six-foot, seven-inch lie-flat bed. And they have some of the biggest screens in the business, at a massive 27 inches. But the most innovative feature of the Retreat Suites is the fact that the ottomans for each seat can be set up as sitting space for guests — a fold-out table in between the main seat and the ottoman means that guests can dine together or just have a private social space in which to hang out.

The first A330neo aircraft will have two Retreat Suites onboard in the Upper Class cabin, located in front of the cabin in the middle of the two aisles. The seats can be combined into a two-person suite, or a divider can keep them separate for solo travelers. They will be available for Upper Class passengers to upgrade to starting 14 days before the flight at the relatively low price point of £200 (about $240).

Behind Upper Class, the A330neo will have 45 Premium seats, the airline's premium-economy product, which offer extra recline and leg room, leg rests, and wireless charging ports. And in economy, the 184 seats will be a 2-4-2 layout, which reduces the number of middle seats in the cabin compared to many other wide-body aircraft, which often feature 3-3-3 layouts. Economy will be split into two types of seats: Economy and Economy Delight, which has three extra inches of leg room compared to the standard economy seat.

"The A330neo plays a significant role in our multi-billion dollar fleet transformation, demonstrating our commitment to the planet," Corneel Koster, chief customer and operating officer at Virgin Atlantic, said in a statement. "We know the most impactful thing we can do as an airline is to fly the cleanest, greenest, youngest fleet possible and the A330neo is integral to achieving this goal, reducing the average age of our fleet to just seven years by 2026. It's truly a plane for the future."

Virgin Atlantic's A330neo will make its debut on the airline's Boston to London route in October 2022; tickets will go on sale this month. 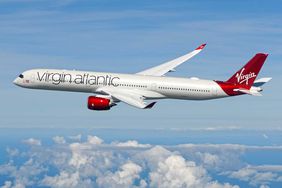 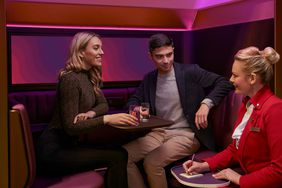