San Diego International Airport, or SAN, is located three miles northwest of downtown San Diego, California. Also known as Lindbergh Field, it was named after the famous airman in 1928. The airport’s present day site is located near the historic Ryan Airline Company airstrip, where Charles Lindbergh tested the Spirit of St. Louis before his 1927 transatlantic flight.San Diego isn’t an airline hub (it happens to be the largest metropolitan area in the United States without that designation) but it is a focus city for Alaska and Southwest Airlines. Southwest, American, United, Alaska, and Delta dominate San Diego by seat capacity (Southwest, in particular, represents more than 42 percent of all seats). In 2015, SAN’s passenger traffic exceeded 20 million passengers, which breaks down to 465 flight operations and 48,000 passengers per down. With international flights to Canada, the United Kingdom, Mexico, and Japan, it’s the busiest single-runway commercial airport in the county.Served by I-5, with connections to California State Route 163, I-8, and I-15, many passengers reach SAN by car. Amtrak Intercity and the COASTER commuter train also link the airport to Los Angeles, Orange County, downtown San Diego, and coastal North County, with stops in Old Town, Sorrento Valley, Solana Beach, Encinitas, Carlsbad, and Oceanside. San Diego’s Metropolitan Transit System (or MTS) runs a shuttle from the airport terminals to Santa Fe Depot, where travelers can pick up Bus Rapid Transit (or Rapid), both COASTER as well as Amtrak trains, and three Trolley lines. MTS’s Trolley system connects the airport to stops downtown, the San Diego Convention Center, San Diego State University (SDSU), Old Town, and the Mexican border. In 2015, construction began on California’s High-Speed Rail System, whose southern terminus will be the San Diego Airport. The project could potentially reach as far north as Sacramento, with trains running at a sustained operating speed of no less than 200 miles per hour. Other than being in the air, it’s a great way to beat the traffic. 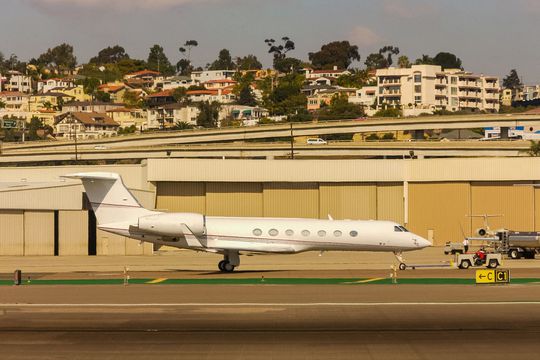