Located on the upper level, between gates 73 and 75A in Terminal 7 at LAX and accessible via elevator and stairs, the new lounge has 140 seats, 272 power outlets and 120 USB ports, and a dozen semi-private work spaces with oversized chairs, AC and USB power, work or dining table, privacy dividers, and a lamp.

Additional amenities in the lounge include six shower suites with rainfall shower heads and Soho House & Co’s Cowshed Spa products, a pair of daybeds outfitted with Saks Fifth Avenue bedding, and a valet service that will steam wrinkled clothes. There’s also an on-site washing machine for travel wardrobe emergencies and, for those who may have forgotten a needed personal care item, a closet full of complimentary or loaner amenities such as deodorant, curling irons, hair straighteners, shower caps, and toothbrushes.

In addition to United’s Signature scent (called “Landing”) and large windows offering views of airfield activities, much of the core design and services in the lounge will be somewhat familiar to customers who have visited United’s other Polaris lounges at Chicago O’Hare Airport, Newark Liberty International Airport, Houston's George Bush Intercontinental Airport, and San Francisco International Airport. However, the new LAX lounge adds some decidedly Southern California and Los Angeles touches, including a wine wall and artwork by L.A.-based artists.

The menu was developed by Los Angeles native chef Tritia Gestuvo and features offerings such as street tacos, house-made cinnamon churros, and almond-crusted fish and chips. The bar menu includes Signature Polaris lounge cocktails, such as the “Paper Plane,” a bourbon-based drink garnished with a tiny paper plane, but also a pair of L.A.-inspired cocktails, including the “Let’s Rumble,” made with an organic, locally made rum, fresh lemon, prickly pear puree and house-made simple syrup, and the “On Sunset,” a tequila sunrise that pays homage to L.A.’s Sunset Boulevard. The wine list leans heavily to California wines.

The LAX Polaris lounge is also the first to offer a permanent “Action Station,” where United chefs and other staff members will engage with customers through food and drink demonstrations, said Alexander Dorow, United’s director of premium services. “We’ve introduced this in other ways in other Polaris lounges," Dorow added, "but this is the one where we intend it to be a regular destination and experience for our customers.” 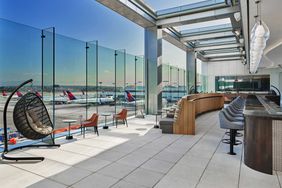 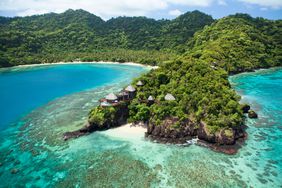