Which London Airport to Fly Into Based on Your Travel Plans

Heathrow or Stansted? Gatwick or Luton? City or Southend? We break down the best and worst London airports for speed, convenience, cheap flights, and more.

London is a city known for its diversity — in people, in food, in neighborhoods. And even in airports.

If you’re flying to, from, or through the English capital, you will be spoiled for choice when deciding where your plane will take off or land. There are six different airports that service the city. But none of them are the same.

Most people will know of London Heathrow, but what about London City or Southend? If you book a flight to one of the city’s lesser-known airports, you could find yourself a long way off from where you had intended. Or perhaps you’re looking for an airport with easy connections into the city center to make the most of your time in London.

Following is everything you need to know about London’s airports: where they’re located, what their reputations are, and how you can get to and from each of them. No matter where you choose, here’s how to navigate your way through London’s six airports.

Heathrow is London’s main airport and the busiest in western Europe, with more than 75 million passengers passing through every year. The airport currently operates four terminals. According to the Skytrax annual airport awards, it’s one of the best in the world for its shopping, food, punctuality, comfort, and security.

Worst for: Speed at immigration. It can get very congested.

The Heathrow Express is the fastest link between the airport and the city center. Trains take about 15 minutes between the airport and Paddington train station. The option can be a bit pricey, ringing in at £22 if you buy a ticket just before boarding. But if you book tickets well in advance, they can be found as cheaply as £5.50.

The TfL Rail also runs between Heathrow and Paddington but takes about 15 minutes longer than the Heathrow Express. A one-way trip will cost £10.50.

Coach bus services run from Heathrow to London Victoria Coach station, starting at £6 one-way. At its fastest, the bus journey can take about 35 minutes but it’s more likely to last about an hour.

The most cost-conscious way to get to the airport is the London Underground. The Piccadilly Line runs from the airport through central London (including stops at Leicester Square, Covent Garden, and King’s Cross St Pancras) through to the northern suburb of Cockfosters. One ride on the underground costs £3.10.

A taxi to central London from Heathrow usually costs between £45 and £70. It generally takes about an hour to drive to the airport, depending on traffic.

London Gatwick is the second-busiest airport in the U.K., with more than 45 million passengers passing through every year. It’s located about 30 miles south of central London in West Sussex.

Best for: Speed. Gatwick’s got a swift security process and, thanks to automatic gates, immigration lines tend to move fast.

Worst for: Budgeters. The airport won’t let you to your gate until just before boarding time. And because there isn’t much by way of general seating, passengers are usually forced to kill time in shops and restaurants.

There are several public train options to get to Gatwick. The Gatwick Express takes passengers from the airport to central Victoria Station in 15 minutes. A round-trip ticket on the train costs £33 and is valid for any two rides within one month of each other. Southern Railway trains also run from Victoria to Gatwick, but take about a half-hour. If you have an Oyster card (the card you use to access London’s public transport system), you could save with one-way fares from £10.60.

ThamesLink service runs to Gatwick from several stops in central London, including St. Pancras Train Station, London Bridge, and Farringdon. One-way fare costs £9.70. Travel time is anywhere from 35 to 50 minutes, depending on where you’re coming from.

National Express bus service operates from Gatwick to Victoria bus station in about a half-hour. Coach service starts at £10. Book in advance online to save.

A taxi between central London and Gatwick will likely cost at least £50 and take about one hour. It’s best advised to book in advance to get the best rate.

The Hilton Gatwick is the largest hotel at the airport, with more than 800 rooms (available from £89 per night). It’s connected to the airport’s southern terminal by walkway so you don’t have to brave the elements. The Sofitel London Gatwick offers a generous noontime checkout and a slew of dining options on site. Double rooms are available from £119 per night.

If you’re flying a budget airline, you’ll likely be headed to Stansted. It’s the fastest-growing airport in London and last year saw 25 million passengers through its terminal. Stansted is located about 35 miles northeast of London.

Best for: Cheap connections to Europe

Worst for: Killing time. There isn’t much by way of shopping or distractions.

The most efficient option is the Stansted Express, with service from the terminal to London Liverpool Street train station in about 50 minutes. If you book well in advance, tickets can cost as low as £7.

National Express buses run from several points in London, starting at £3.50 one-way. You can arrange to hop on in Shoreditch or at train stations like Paddington and Victoria. It will take about 50 minutes, depending where you’re starting from.

A typical taxi journey from the city center to the airport will cost around £55.

Stay in an airport hotel that has a vibe of anything but. The Linden House is located only 10 minutes’ drive from the airport but feels steeped in history. The boutique hotel has cosy English vibes, available from only £99 per night.

If you’re flying through Luton, you’re likely flying somewhere else in Europe. The airport, located about 30 miles north of London, is the base for budget airlines EasyJet, TUI Airways, Ryanair, and Wizz Air.

Best for: Cheap access to mainland Europe. You can’t beat a lot of the fares out of here.

Worst for: Parking. Although the airport is undergoing renovations, you have to leave your car quite a ways away.

The quickest way to Luton is a 22-minute train from St. Pancras train station (via the East Midlands train and it will cost about £13. There’s also a bus from London Victoria station that runs to Luton Airport for £12. It takes about an hour and a half to complete the journey.

A taxi will take about an hour and will cost about £70.

Where to stay: To stay as close to the airport as you can, opt for the Hampton by Hilton Luton Airport. It’s located next to the Luton Airport Parkway station, where you can board a shuttle bus that will take you directly to your terminal. Rooms are available from £64 per night.

Budgeters can stay at the Hotel ibis London Luton, located a 10-minute walk away from the departures terminal. It’s available from £35 per night.

As its name may suggest, London City Airport is the airport located closest to the city center. It’s only got one runway and is one of London’s smaller airports, designed with an emphasis on business travel between Europe and New York City. It’s located just six miles east of London city center and is serviced by major airlines like British Airways, Alitalia, KLM, Lufthansa, and Swiss International Airlines.

Best for: Quick and cheap city access. This is one of London’s airports where a taxi journey is actually reasonable.

Worst for: Long distances. The only non-European destination currently on offer at the airport is New York City.

At their least frequent, trains from London City Airport depart every 15 minutes. A train called the DLR runs from the airport and will get you into the city center in about 20 minutes. If you use an Oyster card, it will only cost £3.30.

Typical taxi rates to the city center start around £30.

Aloft London Excel offers easy access to both London City Airport and the city of London itself. There’s plenty to do with an on-site pool, karaoke room and live entertainment venue space.

If you’re looking for cozier vibes than the typical airport hotel, the Prince Regent Hotel Excel London is a bed and breakfast with classic English charm. The hotel is located a five-minute drive from London City Airport.

Londoners have mixed feelings about Southend. It’s located in Essex, 36 miles from the city center, which can make people wary. But it’s also been voted the best airport in the capital. If you’re willing to make the trek, you could find a surprisingly pleasant experience.

Best for: Experience. You’re most likely to have a hassle-free pass from the doors to your gate here.

Worst for: Distance. It’s a bit of a trek from the city center.

There are two trains from London that will get you to Southend. From London Liverpool Street Station, the train will take 53 minutes and cost £16.70. To get to Stratford Station east of the city center, it will take 44 minutes and £13.60.

An official taxi will cost £110 and will likely take over an hour.

To get as close to the airport as possible, book a night at the Holiday Inn. It’s located just a few minutes’ walk from the airport so you never need worry about traffic. The hotel recently underwent refurbishment and boasts a rooftop bar with panoramic views of the airport, perfect for any plane spotters. 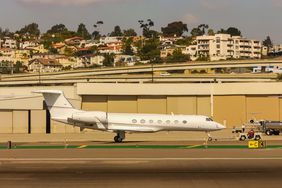 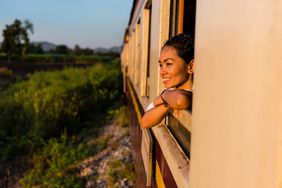