As an ode to New York City’s former graffiti mecca, an interactive installation at LaGuardia’s Terminal B allows visitors to become part of the art.

When a yellow warehouse in New York City's Queens opened as 5 Pointz in 2001, it quickly drew graffiti artists from around the globe to its 200,000 square feet of painting surfaces. But then in 2013, it was suddenly whitewashed by the building's owners, erasing what had become a global mecca for aerosol artists.

The trick is where to find it inside the new Terminal B. Like most airport stores, the 15,000-square-foot Bowery Bay Shops consists of various kiosks. Look past the LEGO area and next to the Sharper Image section and there's a large screen on the wall with a digital circular interactive screen to the left of it.

From the screen, users can select which 5 Pointz artists' work they'd like to be part of: Meres One, Djalouz & Doudoustyleart, Jimmy C, Dustin Spagnola, or Monsieur Plume (whose art is pictured). Once the selection is made, the user poses for a photo and the resulting art will be displayed on the large screen.

"Part of our mission as a design studio is to connect people to places, so the notion of resurrecting a place like 5 Pointz really attracted us," James Patten, director of Patten Studio told Travel + Leisure, noting that Marshall Retail Group suggested 5 Pointz and that they worked with its curator Marie Cecile Flageul. "The work itself is also just really compelling."

This is just one of three interactive features Patten Studio has at the Bowery Bay Shops. There's also a 130-foot media screen with 210 LED Strips showing videos of New York City, integrated with the movements of passersby, who are projected as silhouettes. Among the shelves of local bookshop Strand Bookstore are also animated images of New Yorkers, moving among the books.

While 5 Pointz is no longer there, Google Cultural Institute has created an archive to experience the landmark in its heyday. Last February, a judge upheld a decision to award $6.75 million to the artists whose work was lost without warning. 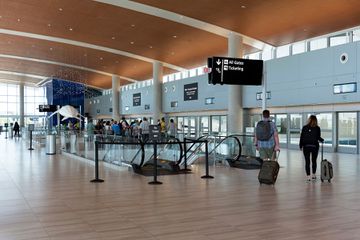 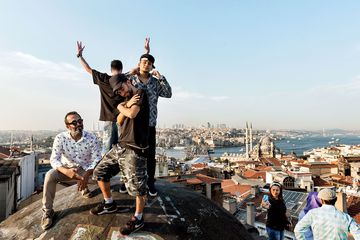