Many frequent fliers refuse to eat on airplanes. Not only can eating at the wrong time mess with your circadian rhythms, the air pressure in the cabin affects your digestive system — meaning that in-flight pasta probably won’t reach its final destination until your aircraft does.

Noticing that many passengers were avoiding eating during long-haul flights, Fiji Airways devised a new solution to change the way business class passengers dine while traveling.

The airline is introducing “Dine on the Ground,” which will move the business class in-flight meal service to the airport lounge shortly before takeoff. Passengers will be able to dine on lighter foods — including fruit bowls, paninis, salads, tapas and soups — throughout the flight.

The airline told Australian site Traveller that its research showed 31 percent of Australian passengers skipped their in-flight meals to sleep through the flight. As a result, the airline was throwing out 38 percent of its food on board.

The service is available on morning and evening flights from the airline’s base in Nadi, Fiji to Australia, Hong Kong, Los Angeles and San Francisco.

It’s not new for an airline to offer full dining on the ground and smaller options while in the skies. Earlier this year, United tested a similar concept for overnight transatlantic flights from Washington-Dulles Airport. And many airlines offer full meal service both at their lounges and in their cabins. What is new is an airline moving its full meal service to the ground.

This move remains only for business class passengers. Those in economy class will either have to feed themselves at the airport pre-departure or resign their digestive tracts to some pressurized in-flight dining. 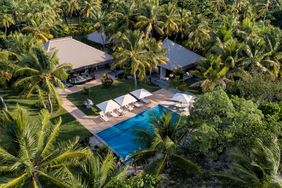 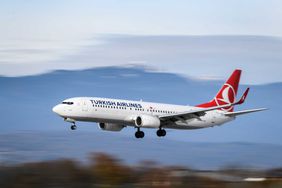