Denver International Airport (DIA) has some secrets. At least, that's what conspiracy theorists on the internet will tell you.

Built as a replacement for Stapleton Airport, near Denver, in 1995, DIA has always had its share of nefarious conspiracy theories about it. From the beginning, Coloradoans have theorized about the airport's secret tunnels, clues to Nazi secret societies, and horrifying harbingers of doom "hidden" in public artwork around the Denver hub.

It doesn't help that even the Denver airport's officials are perfectly willing to fuel these wild ideas about Illuminati bunkers and links to aliens in its own advertising campaigns. "We have a CEO (Kim Day) who really embraces the conspiracy ideas," Heath Montgomery, senior public information officer for DIA, told the Denver Post in 2016. "We decided a few years ago that rather than fight all of this and try and convince everybody there's nothing really going on, let's have some fun with it."

Even though the airport is mostly making fun of its own eccentric (and sometimes sinister) history, there are still a lot of people who take the rumors seriously.

So, why are conspiracy theories about the airport so persistent? It actually doesn't have much to do with the airport itself. According to Psychology Today, many people believe conspiracy theories because of their own desire for meaning, certainty, security, or to maintain their own self-image. In the case of the airport, there have always been quite a few questions about its construction, including why the airport cost so much more and took more time to build in the first place. Instead of the simple, boring answers, some may find more comfort in indulging in wild theories — which are decidedly more exciting than any other mundane explanation out there.

Whether you believe the rumors or not, here are five of the most popular conspiracy theories about Denver International Airport that people still like to indulge.

It Was Built by the New World Order

There are many theories about who built the Denver airport. One of the most persistent theories is that the airport was built by the New World Order with ties to Nazism. The theory even goes so far as to say that the airport's runways are built to resemble a swastika from above. However, looking at photographs of their configuration, the runways don't seem to resemble that shape in particular (unless you're really looking for it). It doesn't help that the airport's dedication marker credits an organization called The New World Airport Commission for building it. This may seem like a coincidence, but it was discovered that such an organization doesn't actually exist, according to the airport's website itself. People have also noted "strange" markings on buildings, which are believed to be connected with the New World Order, as well. In reality, many "mysterious" building markings are actually references to the Navajo language or periodic table of elements, according to Mental Floss. Still, it seems a little suspicious, right?

The Blue Mustang, also known as Blucifer, is a 32-foot fiberglass sculpture by artist Luis Jiménez, located along Peña Boulevard. It's actually inspired by the sculpture Mesteño, at the University of Oklahoma, but sinister events surrounding the sculpture have fueled conspiracy theories for years. For one, people point to the statues glowing red eyes as a nod to the Four Horsemen of the Apocalypse, though the artist once said that the red color was in honor of the "wild" spirit of the American West. Sure, a likely story. It doesn't help that Jiménez actually died two years before the piece was completed when a piece of the statue fell on him and severed an artery in his leg. Since then, people have been concocting all sorts of wild theories about the horse's purpose. As mundane as it is, it seems the horse is simply artwork, and nothing more.

It Contains the Illuminati Headquarters

In addition to being built by some Nazi New World Order, rumors abound about the many unmarked buildings and underground areas on the airport's property. This theory may have stemmed from a time capsule buried on the property, which bears symbols from the Free Masons, which are "linked" to the Illuminati. One of the main reasons why this conspiracy theory has so much staying power is because the airport was much more expensive than originally projected. So, how was the airport completed? Conspiracy theorists point to Illuminati money, which some believe was used to finish DIA's construction in exchange for the secret society using the property. According to the DIA website, rumors say that the first few buildings on the property were not built properly, but instead of demolishing them, the airport simply buried them and built more buildings on top, giving the Illuminati its own "underground lair."

Its Underground Tunnels Have Bunkers

Rumors surrounding the apocalypse are probably some of the biggest conspiracy theories about the airport. Yes, there are underground tunnels in the airport, including a train that runs between concourses and a defunct automated baggage system, according to Reader's Digest. But the true nature of the tunnels is believed to be more nefarious. Some have theorized that the tunnels also contain underground bunkers (possibly built by Lizard People or aliens) that will serve as a safe place for the world's elite during the apocalypse, according to the DIA website. According to the Denver Post, other theories say that the tunnels directly lead to the North American Aerospace Defense Command (NORAD), which is located only about 100 miles south of the airport, in Colorado Springs. However, it seems like an expensive mode of travel. Not to mention, the new DIA has only been open for about 25 years, and it could possibly take decades to construct a tunnel of that length, according to the Denver Post.

The Artwork Provides Clues About the End of the World

There are a lot of weird pieces of art throughout DIA as part of the airport's public art collection — besides the giant horse statue on Peña Boulevard. According to the Denver Post, some of these eerie artworks included murals by artist Leo Tanguma, which some believe have alleged Nazi imagery in the murals as proof that the airport is somehow linked to a fascist secret society. In reality, Tanguma's murals are about world peace and a healthy environment, according to the Denver Post. Though we can admit, the murals are pretty terrifying to look at despite their hopeful messages. Others are fixated on the random gargoyle statues that seem to watch over the airport. While the gargoyles may seem a little suspicious, gargoyles have been used throughout the centuries in architecture as a totem to "ward off" evil spirits and protect the buildings. Many of the gargoyles are placed at baggage claim to protect travelers' luggage, according to Mental Floss. 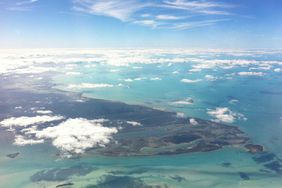 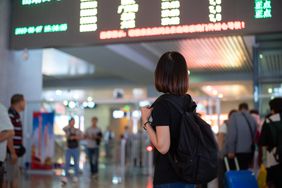