Delta and American are canceling flights til March or April.

On Thursday, the U.S. State Department raised its travel advisory against China to a Level 4, or red (its highest level) due to the coronavirus outbreak, alerting travelers to not go to country at all. Airlines taken measures to keep their customers safe with cancelling flights.

“The main reason for this declaration is not because of what is happening in China but because of what is happening in other countries,” WHO director-general Tedros Adhanom Ghebreyesus told reporters in Geneva on Thursday, according to The Associated Press. “Our greatest concern is the potential for this virus to spread to countries with weaker health systems which are ill-prepared to deal with it.”

More than 200 people have died from the virus, which has infected almost 10,000 people. However, none of the deaths have occurred outside of China. And over the past week, China’s National Health Commission reported that 596 cases had been “cured and discharged from hospital.”

But with the State Department warning, U.S. airlines have cancelled flights to China over the coming weeks and months. Travelers with upcoming plans to travel to China should talk to their airline for more information.

United said in a statement that it is “implementing a second phase of temporary reductions in service between our hub cities and Beijing, Hong Kong and Shanghai” due to “significant decline in demand for travel.”

Although the airline has significantly reduced its service, it will continue to operate flights to mainland China and Hong Kong. From February 9 through March 28, United is now scheduled to operate only four flights to China per week. It will resume service when demand for flights once again increases.

Passengers who have purchased flights to or from China with United from January 22 through March 31 are eligible for a refund, available on United’s website.

Delta will suspend all 42 of its weekly flights to and from China from February 6 through April 30. Passengers who had trips scheduled during this period can rebook their flights after April 30, request a refund or contact Delta to discuss additional options.

“The last China-bound flight departing the U.S. will leave on Monday, Feb. 3 with the last return flight back to the U.S. departing China on Feb. 5,” Delta said in a statement. “The airline will continue to monitor the situation closely and may make additional adjustments as the situation continues to evolve.”

Passengers who had scheduled China travel before the February 6 cut-off date can change their plans with Delta’s change fee waiver.

American Airlines cancelled all flights to and from mainland China, effective immediately through March 27, based on the State Department’s travel advisory.

“Our teams are contacting affected customers directly to accommodate their needs,” the airline said in a statement. “We will continue to evaluate the schedule for March 28 and beyond and make any adjustments as necessary.”

Earlier this week, the airline announced its intentions to reduce China service from February 9 through March 27. Passengers can change their travel plans to Beijing, Shanghai or Hong Kong for free. Those who had scheduled travel to Wuhan can apply for a refund on their travel. 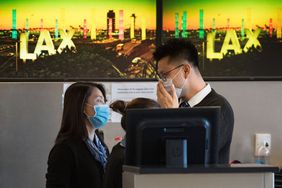