But not without going on some adventures around the airport first...

A stuffed Dalmatian toy was reunited with his six-year-old owner after he was accidentally left behind at Cincinnati/Northern Kentucky International Airport earlier this month. But before the pair were reunited, the toy went on an epic tour of the airport.

The stuffed pup, named Masch Masch, was given to six-year-old Jaydence Ronco by a judge the day he was adopted. Although he's a loyal companion who accompanied the young traveler on a family trip to Cincinnati, he was actually left behind in the airport while Jaydence and his parents were boarding a flight home to Madeira Beach, Fla.

“I think our son was half asleep when he left Masch-Masch at the terminal,” Jaydence’s father, Doug Ronco, told The Associated Press last week. “Under normal circumstances, he would never forget him.”

Luckily, the airport came across the dog in the terminal and put out an initial Facebook message to find his owner — but continued to document the pup's adventures around the airport on social media.

They took the dog — who they nicknamed “Jet” — on a tour of the airport, even providing him with a face mask to obey current COVID-19 regulations. Jet/Masch Masch went out onto the airport tarmac, visited an airplane cockpit, tasted local Graeter's Ice Cream at the food court, and helped out at the gate side desk. He even did an interview with a local news outlet.

“We are thrilled to be able to reunite this beloved stuffed dog with his owner,” Mindy Kershner, an airport spokesperson, told Travel + Leisure. “It was truly a happy ending.” 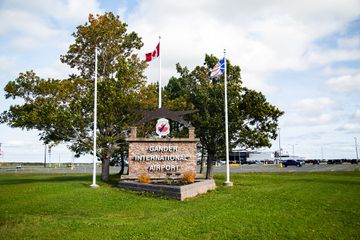