U.S. Airlines Slash Flights to and From NYC Amid Coronavirus Pandemic (Video)

Hundreds of flights have been suspended.

Several major airlines are temporarily suspending flights in and out of New York City area airports as the state becomes the epicenter of the country's coronavirus outbreak.

From April 9 through May 6, American Airlines will only operate 13 flights per day out of New York’s three airports. The airline will now only operate flights between 10 a.m. and 6 p.m. ET in the New York area.

"As coronavirus cases in New York City and the surrounding region continue to increase, along with Centers for Disease Control and Prevention (CDC) guidelines for travel to the area, the demand for flights to the New York area is rapidly evaporating,'' American's senior vice president of operations, David Seymour, said in a statement released to Travel + Leisure.

Typically, the airline flew an average of 271 flights, according to Reuters.

United announced that it would significantly reduce its New York schedule, effective April 5. By cutting flights, United will be able to reduce the number of employees who show up for work every day. All employees will continue to receive their full salary and benefits throughout the temporary suspension. The cuts will remain in place for at least three weeks.

“Even with these schedule reductions, our New York and New Jersey customers will still be able to travel to nearly every domestic market we serve and the three international destinations we continue to fly to every day,” Greg Hart, United’s Chief Operations Officer, said in a letter to employees over the weekend. “Our service also enables the shipment of much-needed medical supplies and will allow us to continue to bring health care professionals from around the country to the front lines of this crisis in New York and New Jersey.”

Last week, JetBlue announced it would significantly slash service from its main hub in New York. The airline will now only offer 40 flights per day, as opposed to its normal 200, according to CNBC. JetBlue will also cap flights to ensure that passengers can maintain social distancing while they are aboard.

CNBC also reported that Delta is cutting New York-area flights by "around 90 percent," while Spirit Airlines has suspended flights entirely.

The reduction in flights follows the Centers for Disease Control and Prevention (CDC)'s advisory against all nonessential travel to and from the New York City area, including Connecticut and New Jersey.

According to state data, more than 130,000 people have tested positive for coronavirus around New York State, more than 72,000 of which have been in New York City. 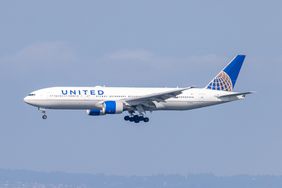